Increasing temperatures and sea levels, changing precipitation patterns and more extreme weather are threatening human health and safety, food and water security and socio-economic development in Africa, according to a new report devoted exclusively to the continent.

The State of the Climate in Africa 2019 report, a multi-agency publication coordinated by the World Meteorological Organization (WMO), provides a snapshot of current and future climate trends and associated impacts on the economy and sensitive sectors like agriculture. It highlights lessons for climate action in Africa and identifies pathways for addressing critical gaps and challenges.

The report is being released on 26 October at a ministerial-level launch to highlight the urgency of climate action in Africa and the current state of capacity. The risks are becoming more severe.
“Climate change is having a growing impact on the African continent, hitting the most vulnerable hardest, and contributing to food insecurity, population displacement and stress on water resources. “In recent months we have seen devastating floods, an invasion of desert locusts and now face the looming spectre of drought because of a La Niña event. The human and economic toll has been aggravated by the COVID-19 pandemic,” said WMO Secretary-General Petteri Taalas.
“Science-based climate information is the foundation of resilience building, a cornerstone of climate change adaptation, as well as an oasis for sustainable livelihoods and development. The State of Climate Report for Africa has, therefore, a critical role to play in this respect, including in informing our actions for achieving the goals of the Africa Agenda 2063,” said H.E. Josefa Leonel Correia Sacko, Commissioner for Rural Economy and Agriculture of the African Union Commission.

“The limited uptake and use of climate information services in development planning and practice in Africa is due in part to the paucity of reliable and timely climate information. This report, focusing on Africa, will go a long way towards addressing this gap. The contribution of the Economic Commission for Africa to the production of this report, through the African Climate Policy Centre, seeks to highlight the nexus between climate change and development, and to emphasise that building forward better from the Covid-19 pandemic requires a development approach that is green, sustainable and climate resilient, informed by the best available science. The participation of multiple institutions and agencies in producing the report reinforces our principles and approaches of working as one,” said H.E. Vera Songwe, Executive Secretary of the United Nations Economic Commission for Africa.

Rising temperatures and sea levels
The year 2019 was among the three warmest years on record for the continent. That trend is expected to continue. African temperatures in recent decades have been warming at a rate
comparable to that of most other continents, and thus somewhat faster than global mean surface temperature. 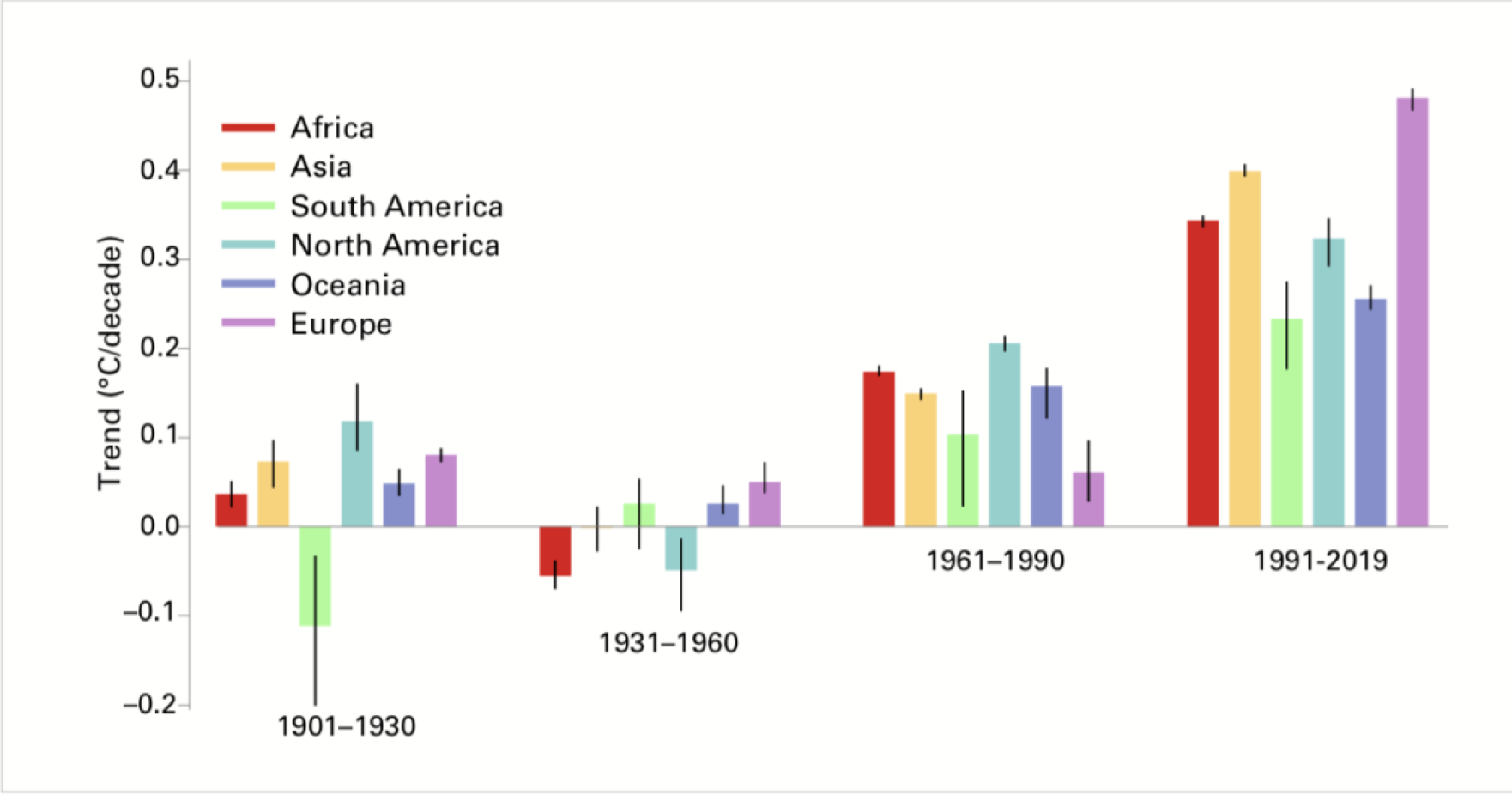 Trends in mean surface air temperature over four sub-periods using the HadCRUT4, NOAAGlobalTemp and GISTEMP data sets. The bars indicate the trend in the mean of the three data sets, and the black lines indicate the range between the largest and smallest trends in the three individual data sets.

The latest decadal predictions, covering the five-year period from 2020 to 2024, shows continued warming and decreasing rainfall especially over North and Southern Africa, and increased rainfall over the Sahel.

Extensive areas of Africa will exceed 2 °C of warming above pre-industrial levels by the last two decades of this century under medium scenarios as reported in the Intergovernmental Panel on Climate Change Fifth Assessment Report. Much of Africa has already warmed by more than 1 °C since 1901, with an increase in heatwaves and hot days. A reduction in precipitation is likely over North Africa and the south-western parts of South Africa by the end of the century, according to the IPCC. 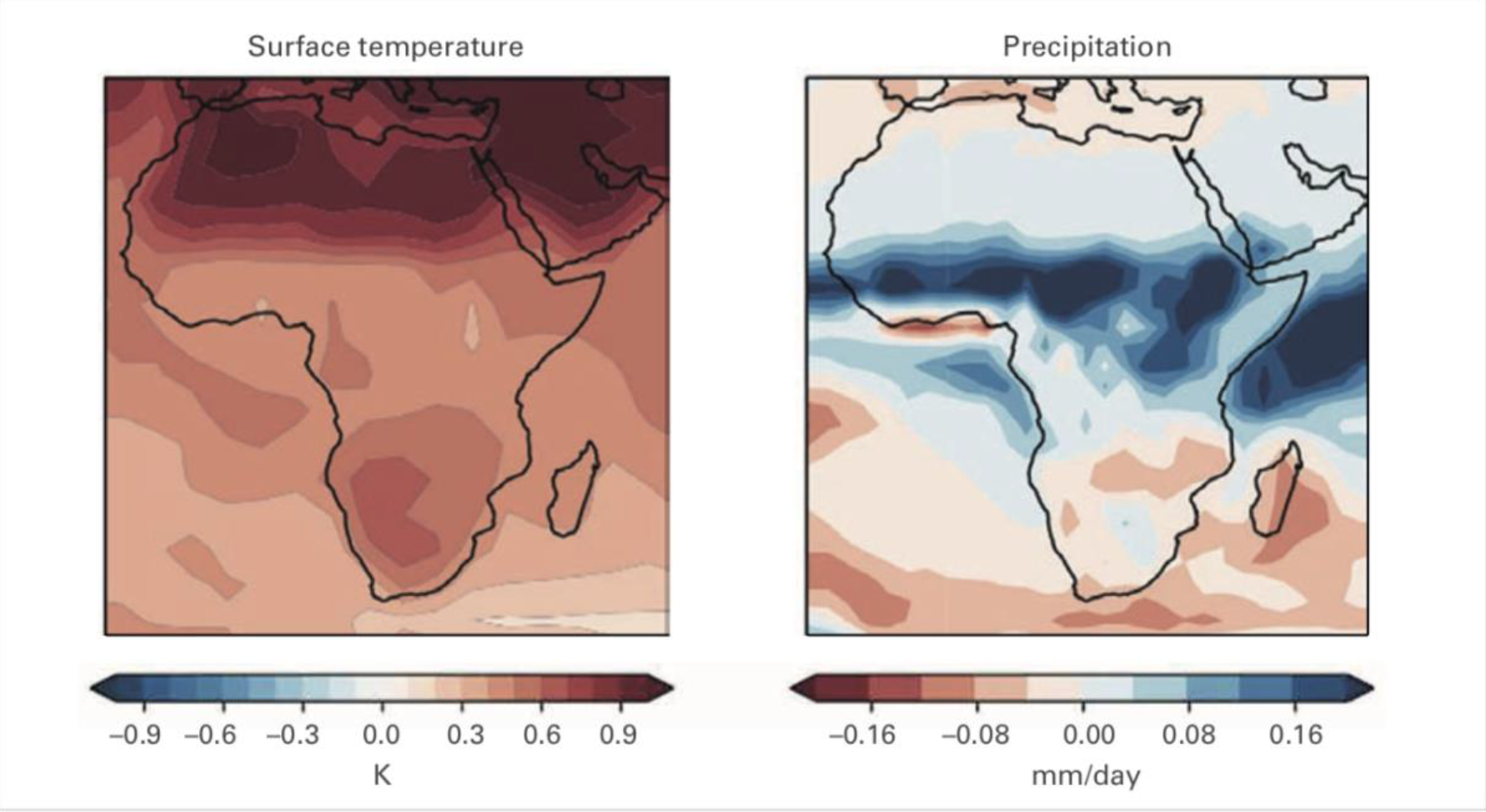 Multi-model average forecasts of near surface temperature and precipitation for the five-year period 2020–2024. Colours show anomalies relative to the period 1981–2010 for the average of several international forecasts contributing to the WMO Lead Centre for ADCP (https://hadleyserver. metoffice.gov.uk/ wmolc/). Forecasts are initialized with observations and start on or after 1 November 2019. Source: Met Office, United Kingdom

Rising sea levels and coastal erosion
There is significant regional variability in sea-level trends around Africa. Sea-level increase reached 5 mm per year in several oceanic areas surrounding the continent and exceeded 5 mm per year in the south-western Indian Ocean from Madagascar eastward towards and beyond Mauritius. This is more than the average global sea-level rise of 3–4 mm per year.

Coastal degradation and erosion is also a major challenge, especially in West Africa. About 56% of the coastlines in Benin, Côte d’Ivoire, Senegal and Togo are eroding and this is expected to worsen in the future. Sea level rise is currently not the dominant contributor but is expected to combine with other factors in future to exacerbate the negative consequences of environmental changes.

Extreme events
The report documents high-impact events in 2019. Tropical Cyclone Idai was among the most destructive tropical cyclones ever recorded in the southern hemisphere, resulting in hundreds of casualties and hundreds of thousands of displaced.

Southern Africa suffered extensive drought in 2019. In contrast, the Greater Horn of Africa shifted from very dry conditions in 2018 and most of 2019 to floods and landslides associated with heavy rainfall in late 2019. Flooding also affected the Sahel and surrounding areas from May to October 2019.

Food security impacts
In the drought-prone sub-Saharan African countries, the number of undernourished people has increased by 45.6% since 2012 according to the Food and Agriculture Organization of the United Nations (FAO).

Agriculture is the backbone of Africa’s economy and accounts for the majority of livelihoods across the continent. Africa is therefore an exposure and vulnerability “hot spot” for climate variability and change impacts.
IPCC projections suggest that warming scenarios risk having devastating effects on crop production and food security.
Key risks to agriculture include reduced crop productivity associated with heat and drought stress and increased pest damage, disease damage and flood impacts on food system infrastructure, resulting in serious adverse effects on food security and on livelihoods at the regional, national and individual household levels.
By the middle of this century, major cereal crops grown across Africa will be adversely impacted, albeit with regional variability and differences between crops.
Under the worst case climate change scenario, a reduction in mean yield of 13% is projected in West and Central Africa, 11% in North Africa, and 8% in East and Southern Africa. Millet and sorghum have been found to be the most promising crops, with a yield loss by 2050 of just 5% and 8%, respectively, due to their greater resilience to heat-stress conditions, while rice and wheat are expected to be the most affected crops with a yield loss by 2050 of 12% and 21%, respectively.

Health impacts
Increases in temperature and changes in rainfall patterns also significantly affect population health across Africa. Warmer temperatures and higher rainfall increase habitat suitability for biting insects and the transmission of vector-borne diseases such as dengue fever, malaria and yellow fever.
In addition, new diseases are emerging in regions where they were previously not present. In 2017, an estimated 93% of global malaria deaths occurred in Africa. Malaria epidemics often occur after periods of unusually heavy rainfall. In addition, warming in the East African highlands is allowing malaria-carrying mosquitoes to survive at higher altitudes.

Economic impacts
According to the International Monetary Fund, adverse consequences of climate change are concentrated in regions with relatively hot climates, where a disproportionately large number of low-income countries are located.
The African Climate Policy Centre projects that the Gross Domestic Product in the five African subregions would suffer significant decrease as a result of a global temperature increase. For scenarios ranging from a 1 °C to a 4 °C increase in global temperatures relative to pre-industrial levels, the continent’s overall GDP is expected to decrease by 2.25% to 12.12%. West, Central and East Africa exhibit a higher adverse impact than Southern and North Africa.

Climate Action
Africa’s Agenda 2063, which was concluded in 2013, recognizes climate change as a major challenge for the continent’s development.

Since 2015, the Nationally Determined Contributions (NDCs) to the Paris Agreement have become the main instrument for guiding policy responses to climate change. Fifty-two (52) African countries have submitted their first NDCs and are now in the process of sub- mitting revised NDCs in 2020.

Africa and the small island developing States are the regions facing the largest capacity gaps with regard to climate services. Africa also has the least developed land-based observation network of all continents.

Africa has made great efforts in driving the global climate agenda. This is demonstrated by the very high levels of ratification of the Paris Agreement – over 90%. Many African nations have committed to transitioning to green energy within a relatively short time frame. Clean energy and agriculture are, for example, prioritized in over 70% of African NDCs. This ambition needs to be an integral part of setting the economic development priorities of the continent.

One promising approach throughout the continent to reducing climate related risks and extreme event impacts has been to reduce poverty by promoting socioeconomic growth, in particular in the agricultural sector. In this sector, which employs 60% of Africa’s population, value-addition techniques using efficient and clean energy sources are reported to be capable of reducing poverty two to four times faster than growth in any other sector.

Solar-powered, efficient micro-irrigation, for example, is increasing farm-level incomes by five to 10 times, improving yields by up to 300% and reducing water usage by up to 90% while at the same time offsetting carbon emissions by generating up to 250 kW of clean energy.

Women constitute a large percentage of the world’s poor, and about half of the women in the world are active in agriculture – in developing countries, this figure is 60%, and in low-income, food-deficit countries, 70%. Reducing poverty by means of growth in Africa’s agricultural sector is therefore of particular benefit to women. It also may be the case that in some instances, women do not have access to weather and climate services; it is important that all individuals be provided with access to these services in order to enhance their individual resilience and adaptive capacity.

ABOUT US
Property Insider is an authoritative online newspaper that provides independent news and information to property operatives, investors and buyers.
FOLLOW US
© Copyright 2020 Property Insider. All rights reserved.